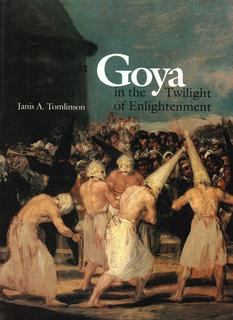 Tomlinson explores the repercussions of the French Revolution in Spain as a framework for reconsidering Goya's work at mid-career. She discusses such well-known paintings as the Family of Carlos IV, the Maja vestida and the Maja desnuda, and the Second of May and Third of May, reassessing them in relation to Goya's changing patrons: Carlos IV and María Luisa, the court favorite Manuel Godoy, the rulers of the interim regimes of the Napoleonic years, Fernando VII, and, finally, the broader public characterized by its fervid support for the conservative restoration regime. Emphasizing the complexity of the context that engendered these paintings, Tomlinson demonstrates that any reading of Goya's works must acknowledge the unique circumstances of their patronage and ideology in a period of transition and ambivalence.

"This will be the basic book on Goya for some years to come. It revises fundamental beliefs about Goya and his participation in a variable and sometimes violent era."

"Tomlinson looks at Goya without the blinkers of old mythologies or current ideologies. The meticulous reconstruction of Goya's changing world and his ability to adapt to it restores the human and historical dimensions of the artist and permits new readings of some of his major works. This is the most stimulating book on Goya to have appeared in recent years."

"This book challenges accepted notions of Goya as an artist of the Enlightenment who shared the same concerns and preoccupations as his intellectual friends and patrons. . . . An absorbing and intelligent study of Goya's secular paintings in context."

"Erudite, vigorous and demythologizing. . . . A work of formidable intellectual and analytical power whose contextual recreations and lucid readings of major paintings will become the point of departure for all future studies of middle-period Goya. . . . Her outstandingly successful enterprise is magnificently supported by the publisher, both in the attention given to layout and in the excellence of the reproductions."

"A fascinating read. Professor Tomlinson is refreshingly stubborn in her desire not to bow to received opinion."

"[Tomlinson] moves the study of Goya into new and immensely fertile terrain." TLS, 1/7/1994